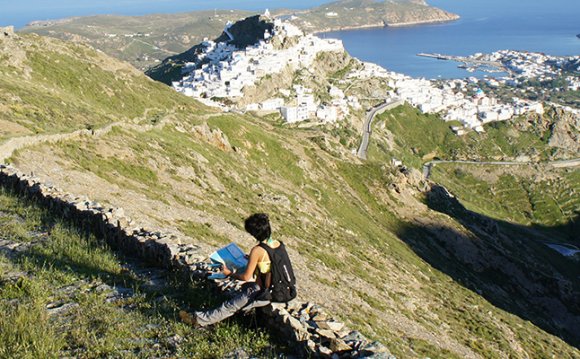 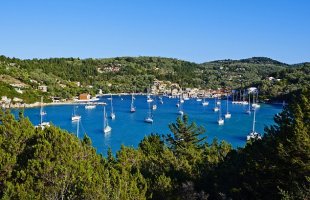 Sailing Holidays, a family-run company headed by sailing enthusiasts Barrie Neilson and his wife Heidi, gives experienced sailors the opportunity to enjoy a relaxed holiday while introducing family and friends to their passion.

It also enables people with little or no experience to charter their own boat. As Barrie puts it: 'We offer the opportunity to meander around the beautiful Greek Islands in the comfort of your own yacht, living the dream.'

With a fleet of 178 boats all stationed in Greece, sailing is done as part of a relaxed flotilla - a group of 10-12 yachts - with an enthusiastic, friendly young crew on the 'lead yacht' always available to help where needed.

Two hours after landing in Corfu, myself and my three children were excitedly exploring Alexia, our very own boat for the week, a ‘Beneteau 40’ which has a good-sized open plan saloon and three double cabins.

These newer yachts benefit from some modern extras such as roller furled (in-mast) sails and self-tailing sheet winches to make handling easier. Ours also has dual steering wheels, auto pilot and an electric anchor windlass to save pulling up the anchor manually.

'Alexia': Catherine and family moor in a cove for a swim before lunch in the sunshine. The Beneteau 40 which is their home for the week is modern and comfortable, as well as easy to sail 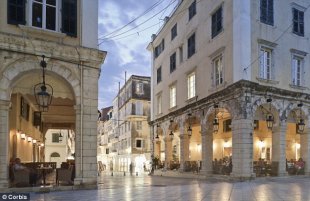 I have crewed sporadically over the years, but possess neither the know-how nor the confidence to navigate and captain a boat on my own, and all yachts must have two adults on board, so Sailing Holidays provided us with our very own skipper.

Josh, a 21-year-old engineering graduate, joined us for the week, and very soon it became clear that we could not have had a nicer, more patient sail trainer on board.

Each day’s sailing was preceded by a meeting in a local cafe with the lead skipper briefing us about the winds expected and the area we'd be sailing in, giving warnings about potential dangers such as shallows or hidden reefs. We also got recommendations on what to see, where to eat out and buy food. The skippers always go on ahead so they can guide boats into safe harbour each night.

On the first morning, Josh gave us a thorough tour of our boat, showing us which ropes worked the sails, how to use the engine, anchor and on board radio, and after breakfast we left Gouvia for the small port of Petrides, on the southernmost tip of Corfu.

It's essential to arrive in port by early evening, before it begins to get dark. After a leisurely morning’s sail (with a top of speed of only three knots thanks to light winds), the children have learned how to tack, and we anchor in a small bay for a spot of swimming and lunch on deck before a longer sail in the afternoon to our evening's destination.

'Free swinging': In the tiny port of Lakka on the northernmost tip of Paxos, the flotilla moors in the harbour, using dinghies to get ashore for provisions

This becomes our pattern for the week: After an early breakfast of fresh fruit and Greek yoghurt with honey we attended the daily briefing and spent our days sailing anywhere between 10 and 20 miles to a succession of beautiful bays where we'd moor up and leap off the boat to swim, snorkel, or go ashore and explore. 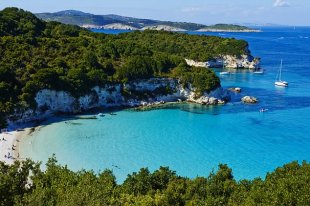 Communal evening meals out in the week in local restaurants meant we got to meet other families and my three children quickly strike up friendships with children their own age.

Low winds in the Ionian at this time of year (October half-term) meant we ended up motoring under sail rather a lot, but just being onboard a yacht with all the time in the world to potter in and out of coves, read and sunbathe, or simply sit and gaze at the ocean all around felt like sheer luxury.

As keen sailor Errol Flynn put it so perfectly, 'There is nothing like lying flat on your back on the deck, alone except for the helmsman aft at the wheel, silence except for the lapping of the sea against the side of the ship.'

On the third day, dolphins swam alongside our boat for a while, and as if that isn't enough excitement for the day, Josh caught a good-sized tuna off the back of the boat which makes for a splendid lunch.

Josh (who it is now obvious is worth his weight in gold) taught the children how to safely use the outboard motor on our dinghy, and it was a heart-warming sight to watch my three children speeding around on the water, exploring caves in the cliff face, and zooming off to say hello to people on other boats moored in the bay.

Being in charge of a powerful engine in such a safe environment is a magnificent opportunity for my teenagers to experience freedom and responsibility at the same time.

My co-skipper encouraged me to take more and more responsibility, and as we cruised down the east coast of Paxos island, I found myself at the helm. Later, I initiated anchoring by myself, calling instructions to my three young crew members under his watchful but relaxed eye. When I moor ‘stern to’ later in the week without a hitch I feel a surge of pride that I am managing a 40-foot yacht with my children.

Stunning: The Old Town of Corfu, with its two castles and beautiful cobbled streets, is a World Heritage site which buzzes with people day and night

In picturesque Lakka we chose to ‘free swing’ in the harbour rather than dock, which means using the dinghy to go onshore for food and water. Speeding back to our yacht by the light of the moon after dinner was a very special experience, particularly for my 14-year-old son who was ‘driving’.

The breathtakingly beautiful Emerald Bay on Antipaxos, where we moored for most of the following day was another highlight of the week. The word paradise is often used by those in the know to describe this cove with its white sand beach and turquoise water, and the happy sound of people diving, swimming and zooming around in dinghies.

That night we experienced some true Greek hospitality after our fun (if rather pricey) communal meal: taverna owner Costa introduces a bottle of Raki for the adults and the subsequent Greek dancing and plate-smashing (much to the amusement of the younger children) goes on until late. 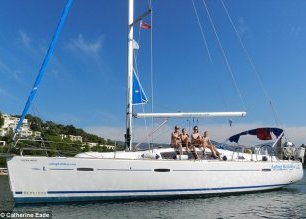 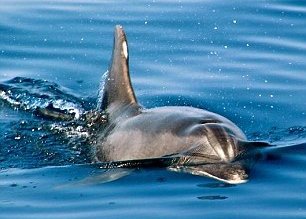