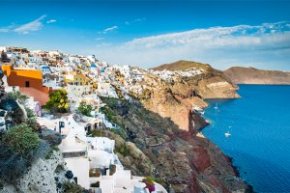 At one time, the Greek islands were the playground of the jet set, made famous by Jackie O and her international coterie. Now a cruise to the Greek islands is an itinerary that's open to anyone, with options ranging from large mainstream cruise ships to smaller sailing yachts.

Your first decision when picking a Greek island cruise is how big a ship you want to be on. Larger cruise ships, such as those operated by Royal Caribbean, Celebrity Cruises, Princess Cruises, Carnival, Holland America Line or Norwegian Cruise Line, will only call upon the higher-trafficked islands, such as Mykonos, Santorini or Crete. The smaller the ship, the more likely that you'll be able to see off-the-beaten path islands like Skiathos or Hydra. Keep in mind that tendering is the rule, not the exception, at all the islands.

The good thing about the Greek islands is that they deliver something for everyone. History-lovers will seek out ruins both ancient and from the Crusades of the Middle Ages. Shoppers will have a field day in the stores and galleries, and beach bums will be in heaven, as nearly every island has plenty of sandy spots, some ranking among the best in the world.

The season in the Greek islands runs from May to late October. While July and August are the most popular for cruise ships, keep in mind that temperatures can top 100 degrees. June and September are probably the best months, as the tourist crush isn't as thick and the climate is cooler. Another factor for wine-lovers: September is the grape harvest at Santorini's vineyards. 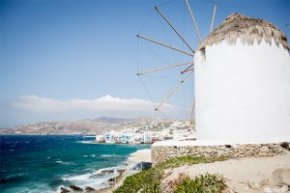 To really get an in-depth vacation on the Greek islands, you'll want to book with a line that has smaller cruise ships that stop at some of the less-trafficked ports. Options include Azamara, Windstar, SeaDream, Seabourn, Silversea and Star Clipper.

Two Greek cruise lines, Celestyal Cruises and Variety Cruises, offer itineraries that focus only on the islands. Celestyal - the former Louis Cruise Lines - uses larger, more traditional cruise ships and normally stays at each island for only a brief period of time. Variety's fleet carries fewer than 72 passengers and focuses solely on sun and fun in the islands.

Eastern Mediterranean: The larger Greek islands of Mykonos, Santorini and Crete are often part of longer itineraries that embark in Venice or Athens and end in Istanbul. Another popular cruise itinerary calls on the islands on the way to Israel. This is the most common way that cruisers experience the Greek islands. 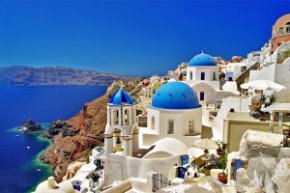 Greece and Turkey: Many Greek island cruises include stops at Turkish port cities like Kusadasi (home of Ephesus), Bodrum, Izmir and Kos. In Turkey, this stretch of coastline is called the Turquoise Coast, and its ancient history is similar to what you'll find in Greece. A cruise that concentrates on Greece and Turkey often runs between Athens and Istanbul or runs round trip from Athens.

Greece Only: If you're looking for true immersion in the Greek islands, look to smaller ships that concentrate solely on hopping between them. On these cruises, you're likely to begin the day at one island for a swim or snorkel, head to another for a BBQ lunch and finish up with an overnight in one of the more happening ports to take advantage of the nightlife. These cruises usually sail round trip from Athens.

The iconic photo of a whitewashed church with a blue dome, set against an equally blue sea, comes from the small town of Oia on Santorini. Oia also has shops, galleries and restaurants in its narrow, picturesque streets. The island's main town, Fira (where the cruise ships tender), also offers gorgeous views of the caldera, as well as the volcano that created the island's high cliffs. Bonus for oenophiles: Some of Greece's best wine comes from Santorini, and you can easily spend the day touring wineries. 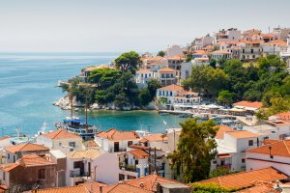 This island has a reputation throughout the world as one of Europe's main beach party spots. But there's a lot to see in Mykonos, even if sun and fun aren't your thing. Photographers will plant themselves in front of the island's too-cute windmills, while shoppers will enjoy the twisty streets of Little Venice. Or take a daytrip to the island of Delos, a once-sacred spot throughout the ancient world, to see the ruins.

Crete has two cruise ports, Chania and Heraklion. Of the two, Heraklion is the more well known. There, you'll want to head straight for the Knossos Palace, one of the most important archaeological sites in the world, with ruins dating back 4, 000 years. From Chania, you can take a wine and olive tour with a guide or visit the chapel of Agia Paraskevi, set atop a pagan cave.

Patmos, Greece. Closer to the Turkish coast than Greece, Patmos is best known as a Christian pilgrimage site, due to its mention in the Book of Revelations. The Apostle John purportedly received the Revelations on the island when he was in a cave, now called the Cave of the Apocalypse. There's an affiliated monastery called the Monastery of Saint John the Theologian; both are UNESCO World Heritage Sites. If religion isn't your thing, visit the historic town of Chora, with its white Byzantine buildings.

Also close to Turkey, Rhodes has one of the best preserved medieval towns in the world, with buildings that date back to Crusader times. Of course, the island is much older than that; a Colossus that once stood in Rhodes' harbor was deemed one of the Seven Wonders of the Ancient World; alas, it's long gone. Walk around Old Town, or take an excursion to Lindos, a historic monument with the Temple of Artemis that dates to the 4th century BC.

Make Skiathos your beach stop, as the island has more than 40 beaches along a small coast. Or you can tour Skiathos Town; the island's main city has houses with quaint Mediterranean-style roofs, bougainvillea-draped balconies and enough cute alleyways to get lost for an hour or two. Walk up to the clock tower for a sweeping view of the island.

Skopelos, Greece. Made famous by the movie "Mamma Mia!", Skopelos is the island paradise where Meryl Streep frolicked with her various suitors. A boat trip that takes you to places in the movie is the main thing to do; otherwise, you can simply go to the beach.

Azamara Cruise to Greece and India