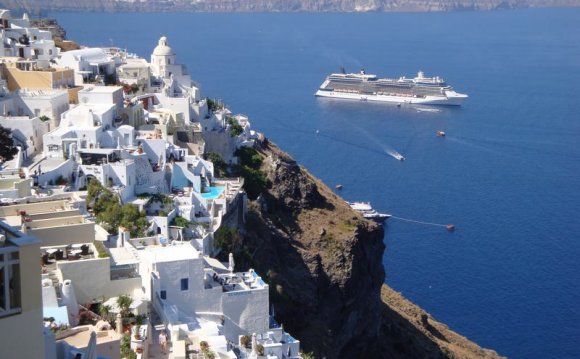 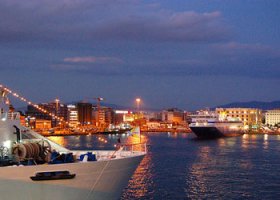 The Greek port of Piraeus at evening time. Athens is 6miles (10km) away, an easy journey by metro railway or bus.

Piraeus has been a major port even since the Golden Age of Greece. The city was planned by Hippodamus, an accomplished architect. Further development took place during the times of the Persian War, when Piraeus was integral to the defense of Athens, as the linking corridor between the city and port was strengthened by stone walls.

Later, during the Renaissance era, Piraeus was named 'Porto Leone', due to the beautiful marble lion standing over the harbor. Unfortunately, the lion was stolen and moved to Venice, where it still stands.

Today Piraeus is the biggest port in Greece, and one of most important in the Mediterranean Sea.

Cruises from Piraeus leave for a multitude of destinations in the Greek Islands and beyond. Most cruise passengers arrive by air, and it's an easy transfer from Athens airport to the port.

Note that the Greek spelling of Piraeus is Pireas, and all signs show the Greek name.

The Port of Piraeus is on the southern edge of the city, on the Saronic Gulf coastline (part of the Aegean Sea). The port is first and foremost a ferry terminus, serving the Greek Islands. Greece has many islands, so ferries are essential and sail in and out of Piraeus 24 hours a day.

Cruise Terminal A (Miaoulis), approached by entrance E11, is located in the middle of the harbor between the Mioulis and Xaveris docks.

Cruise Terminal B (Themistocles), approached by gate E12, sits at the entrance of the harbor, inside the Termistokleous breakwater. Terminal B is often closed, and all passenger facilities are handled by Terminal A. In this case a shuttle bus links the ship(s) docked at Terminal B to Terminal A.

There's a wide selection of cruises from Piraeus, including the Aegean sea and its marvelous Greek Islands, mighty Istanbul towering over the Dardanelles, the fascinating Ukrainian ports of the Black Sea or southwards to the archaeologist's dream Egypt.

Things To Do Near Piraeus Cruise Port

It's only seven miles from Piraeus to Athens, and the majority of travelers will spend the port call in Athens. Athens is a hot, big, crowded and busy city packed with traffic and people. However at the city's center lies the impressive Acropolis, a don't miss attraction for tourists from all over the globe. Near the Acropolis lies the welcoming friendly area of Plaka, a place full of historic interest, another draw for the visitor.

The Acropolis
The top attraction in Athens is the Acropolis, a 150 m (512 ft) rock in the center of the city topped with a series of temples erected in around 400BC. The beauty of these ancient monuments makes the Acropolis world-famous. There is a 12 euro fee to gain entrance. At the top of the Acropolis sits the magnificent Parthenon, an amazing classical Greek temple, a majestic sight from almost everywhere in the city. Nearby stands the Erechtheion. The 6 female figures that act as pillars are not authentic, you can see 5 originals in the Acropolis museum. Number 6 is in the British Museum in London, as well as large pieces of the Parthenon frieze.

Syntagma Square
At the front of the Greek parliament, ceremonial soldiers stand watch dressed in their distinctive skirt with white tights and pom-pommed shoes. Each hour you can watch the mesmerizing changing of the guard ceremony in front of the Tomb of the Unknown Soldier.

Plaka
Just down from the Acropolis sits the Plaka District. This pretty area is made up of meandering pedestrianized streets, bordered by a wide range of souvenir/local goods shops, restaurants and bars.

Roman Forum
The Roman Forum can be found at the west side of Plaka. Here you'll see the beautiful Horologion of Andronikos, an eight faced tower with a different wind god on each side. The entrance to the Forum is via a shared ticket with the Acropolis.

Marina Zea
Zea, also called Pasalimani, is where you can catch one of the Flying Dolphins to the islands in the Saronic Gulf, and you'll also find the most fantastic yachts moored in the marina, one of the largest in Europe. There are lots of restaurants, shops, and tavernas along the shore; if you like boat-watching, sit outside a café and watch the activity in the beautiful harbor.

Hellenic Maritime Museum
This nautical and naval museum has many exhibits showing Greek ships, both modern and ancient. There are paintings, ship models, flags, maps, and all sorts of ship paraphernalia. A section of the wall built around Piraeus by Themistocles in ancient times is here, and so are some items from Aristotle Onassis’s yacht.

Archaeological Museum
The archaeological museum has exhibits from ancient times, such as statues that date back to the 4th century BC. There is a very large funeral monument, grave markers, and important bronze statues of Apollo, Athena, and Artemis. Sculptures from both the Classical and Roman periods are on display, as are many treasures excavated in Piraeus; there are also ruins of an ancient theater nearby.

If you're boarding one of the cruises from Piraeus, you'll probably arrive at Athens airport. You have 2 options for the transfer, Metro Line, or Taxi. The latter is obviously easiest if you have a lot of luggage.

Metro Train
Blue Line 3 joins the airport to Monastiraki where you switch to Line 1, taking you to Piraeus. The journey time between the airport and Piraeus is approximately 75 minutes. On arriving at Piraeus do not be tempted to try walking to the cruise port as it's around one mile from the rail station to Cruise Terminal A, and around a mile and a half to Cruise Terminal B. Instead walk over the main road via the new bridge for pedestrians. Catch a bus to the cruise terminal. (Terminal A numbers 832, 833, 843 or 859, Terminal B numbers 843 or 859)

Taxi
A surcharge is added for trips from the airport, luggage costs more per item and the journey takes more than one hour (it's 30 km between the airport and Piraeus port) so the cab fare can come to 50 euros or even more.

From Athens City Center to Piraeus

Metro Rail Line
Another method of travelling from Athens to Piraeus Port is via the metro railway. ISAP Line number one (green, Kifissia - Piraeus) links Athens directly to Piraeus Port. The trip takes about 45 minutes. Continue to the cruise port by bus.

Taxi
Cab fares are generally low in Greece, but dishonest taxi drivers are not uncommon, so it might be best to use the service recommended by your hotel. You will be charged more for baggage, and extra for entrance to the port. The trip between Athens' center and Piraeus takes around 40 minutes, but can be a lot longer in times of busy traffic.